Peter Kageyama is an internationally recognized expert on community development and grassroots engagement. He is the author of For the Love of Cities which explores in detail the value of emotional engagement with our cities, how that connection is created and nurtured, and how it can be turned into a development resource for places. As the co-founder and producer of the Creative Cities Summit, an interdisciplinary event that brings together citizens, thought leaders and practitioners around the big idea of the city, Peter has been a central connector in the field of place and community making.  He is the former President of Creative Tampa Bay, a grassroots community change organization. He has spoken all over the world about bottom up community development and the amazing people that are making change happen.   His book, For the Love of Cities, was recently recognized by Planetizen as a Top 10 Book for 2012 in urban planning, design and development.

Peter joins us in Franklin County for the Creative Economy Summit 3 on March 23 + 24 in Downtown Greenfield. 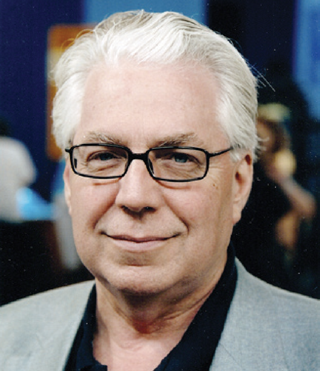 No one predicted that Antiques Roadshow would be such a runaway success–so popular that PBS would schedule both the U.S. and U.K. versions of the show for next season. The success is a surprise even for the man who bought the rights from the BBC, which originated the series 25 years ago. Dan Farrell, who was living in England in the 1970s and working in the film business, was a regular viewer of the BBC show. “I thought it was wonderful,” says the independent producer, now based in western Massachusetts. “I knew certain American television shows had come from English shows–such as Three’s Company–and I thought I would try my hand at it. I thought, ‘Television: how hard can it be?’” Harder than he ever imagined. Farrell bought the U.S. rights in 1981, came back to his homeland, and shopped the show for “just about 14 years” before finding a taker. “Once I told them what I wanted to talk about, I couldn’t even get the meetings! You mention the word ‘antiques’ to anyone who held a television programming position, and you could hear their eyes glaze over. Everyone said, ‘Small, elitist market. . . . not mass-market enough.’ No one would believe me when I said, ‘Look, it’s not about antiques. It’s really about treasure-hunting. It’s about stuff, and everybody’s got stuff.’ It was a very long, hard slog.”
Dan Farrell joins us at the summit as the facilitator of a salon style discussion that involves two major topics that relate to the intersection of art and business; Topic One: Arts, Gentrification and community divide and Topic Two: Myth that Arts are for the Elite.

Join this stimulating conversation on Friday afternoon at 3:30. 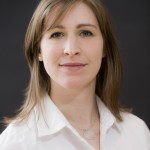 Helena Fruscio is the Creative Economy Industry Director for the Commonwealth of Massachusetts. She has held the position since October of 2011 and in this roll will help advance the state’s $1 billion creative economy industry, which currently employs over 100,000 Massachusetts workers. Helena has been widely praised for her leadership as Director of Berkshire Creative Economy Council in western Massachusetts since 2009. She has also has provided excellent leadership and input into the work of the statewide Creative Economy Council and, more recently, as a gubernatorial appointee to the Economic Development Planning Council. That work also gives her a running head start into the issues that face creative businesses across the state. Helena’s priorities include working with the Massachusetts Creative Economy Council to aggregate governmental, non-governmental, regional, and private resources that are available to the creative industry statewide. Helena also hopes to enhance the connectivity of the industry through the use of social networking, the MA state innovations  blog, and other internet tools.

Join Helena on Saturday, March 24 at 11:00 to learn more about her job, the department and it’s role in the Creative Industries impact. 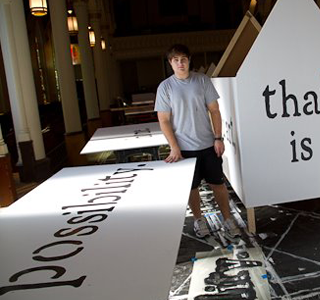 The founder of Action Art, Peter Krasznekewicz, was born in San Francisco on April 8, 1995. He spent the first fourteen years of his life in Big Sur and Carmel, California living on a ranch. Looking for a new adventure and a new challenge, Peter decided to attend high school at Deerfield Academy in Deerfield, Massachusetts where he is currently a junior. He spends most of his vacations traveling and in Big Sur, California. He is an avid scuba diver, a cellist since the age of 4, and a lacrosse player. Peter has been building things since a young age. The idea for Action Art came to him when thinking of what to do over the summer and being asked the question: “If you could be anyone or do anything, who would you be and what would you do?” Having studied and created a website on the artist Christo in his eighth grade art history class, he chose to do an environmental art project. This led to the founding of Action Art, Inc.
Peter intends to complete many artistic projects in the coming years that interact with different communities and contribute back to society. The little White House Project – “Dwell in Possibility” is the first of his many ideas. He hopes to take his concept to other places around the country. 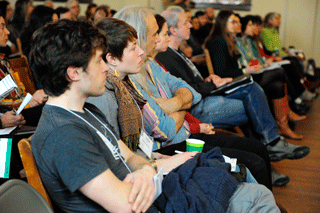 From across the country to across the road our friends and neighbors are building up the cultural cache of their work lives by keeping their missions attached to the arts. Panels presented here at the summit include creative people and organizations who have hatched an idea and nurtured into a living for themselves. They have drawn inspiration from staying close to the arts, science, nature and education, all part of our cultural make-up. Choose from 5 different panels of creative business people over the course of two days. Presenters ply their trade and earn a paycheck, from our own backyard here in Greenfield to the Western coast of Alaska. Keep in mind that imitation is the highest form of flattery and you may come away with some gorgeous ideas of your own!
Friday:
[list type=bullets-red]

The conference for photographers and designers.